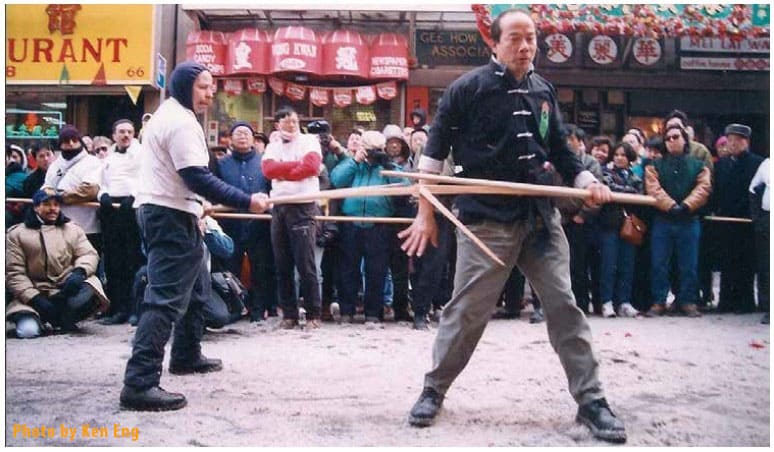 The Southern Praying Mantis System has a history of over 200 years and is credited to Som Dart. He was a monk at Jook Lum Gee (Bamboo Forest Temple) in the shadows of Lung Fu San (Dragon Tiger Mountain) in China’s Kwong Sai Province. Som Dart spent much of his life perfecting the system and later taught it to a fellow monk, Lee Siem. Due to Lee Siem’s exceptional intelligence and physical prowess, he was able to master the system’s intricacies under the skillful guidance of Som Dart. Traditionally, the Chinese martial arts were taught at monasteries. Outsiders were usually not accepted as students. Due to political changes towards the end of the Ching Dynasty, the monks began accepting students from beyond the monastery walls. The first outsider to be taught this unique system was Chang Yu Jung. He was taught by Abbot Lee Siem, and later became the foremost authority on the system.

From Chang Yu Jung, Lam Wing Fai (Lam Sang) became the second outsider to learn and inherit the system. After immigrating from China to the United States, Lam Sang introduced the system to New York’s Chinatown during the 1950’s. It was taught only to Chinese within the community. By 1969, Great Grandmaster Lam Sang retired to Taiwan leaving Grandmaster Chin Ho Doon the responsibilities of teaching the system at the Chinese Free Masons Athletic Club.

In 1972, Grandmaster Norman Chin inherited the responsibility of teaching the system at the Chinese Free Masons Athletic Club after Grandmaster Chin Ho Doon returned to China to fulfill business obligations. After more than forty five years of teaching, Grandmaster Norman Chin is still teaching in Chinatown New York, with branches in Brooklyn, New Jersey, Los Angeles, Montana
and Kentucky. The Late Great Grandmaster Lam Sang, of Hakka descent, immigrated to the United States from China by way of England during the early 1950’s. He made his home in New York City’s Chinatown. For a short time, he taught at the Sung Tsing Association in the evenings after a long day’s work.

By the mid 1950s, he was invited to teach at the Hip Sing Association at 3 Pell Street. His stay there was also brief. Great Grandmaster Lam Sang taught and established his association with the Chinese Free Masons Athletic Club by the late 1950’s. It was at the Chinese Free Masons Athletic Club, 96 Mott Street, where he accepted his most dedicated disciples. By 1963, Jook Lum Tong Long Pai was the largest kung fu school in Chinatown New York. He continued teaching until 1969 when he retired to Taiwan. He returned to New York in 1981 and taught privately until his passing in 1992. During a visit to Bruce Lee’s home in Culver City, Bruce invited Norman to stay, train and maybe work in the Los Angeles area. Due to Norman’s busy design work in New York, he had to decline. Since Wing Chun and Tong Long are both short hand styles, Bruce suggested that Norman open a school in New York. Norman informed Bruce that permission must be granted by Grandmaster Lam in order to proceed. Grandmaster Lam and Grandmaster Chin Ho Doon needed time to think about expansion when Norman told them about what Bruce said during his visit. It was not until 1972 that Grandmaster Lam thought it was a good time to expand the school. Grandmaster Norman Chin was able to find a prestigious location on 210 Fifth Avenue in New York.