I love it when scientific studies prove the medical benefits of ancient mind-body methods extolled for their health-giving powers for thousands of years. China is a country rich in mind-body healing traditions, ranging from herbal medicine, bone-setting and acupuncture to meditation, qigong and tai chi.

Recently, a study showed that tai chi may prevent onset of heart disease in arthritis patients. To practitioners of the art, this makes perfect sense and didn’t need a study to prove. Yet, studies like these add credence and support the living folk knowledge and healing traditions. Here, we’ll look at the study and consider tai chi in the context of both arthritis and heart disease. 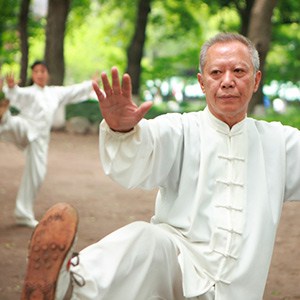 Legends state that Tai Chi was created by an immortal named Chang San Fang as a mind-body moving meditative, and energy cultivating practice. By matching breath and posture in a long sequence of movement done slowly over time, the body aligns its energy centers, clears its mind, and releases its tension.

Patients suffering rheumatoid arthritis (RA) are associated with a higher risk for heart disease, formally known as cardiovascular disease (CVD). A cause of CVD is atherosclerosis, a state wherein plaque builds up in the arteries; the blood vessels responsible for shuttling oxygen-rich blood to your heart and throughout the body. Atherosclerosis is in part triggered by dysfunction of the endothelium (inner lining of blood vessels) which causes stiffening of the arteries.

It is believed that the practice of tai chi is able to restore endothelial function in arthritic patients, thereby staving off onset risk of CVD.

A study was conducted on the connection between tai chi practice and heart disease among elderly women with rheumatoid arthritis, the results of which were published in the journal, Arthritis Research & Therapy.

Fifty-six patients were recruited for the study; 29 of them were assigned to a Tai Chi study group while 27 were placed in a control group. Those in the Tai Chi group received once-per-week classes over a three-month period. The control group only received information about the general benefits of exercise with arthritis. Assessments of all participants were done at baseline of the study and at completion three months later for RA disease activity, functional disability, CVD risk factors, and three atherosclerosis measurements.

The authors concluded that, “Tai Chi exercise in elderly women with RA significantly improves endothelial dysfunction and arterial stiffness, which are known atherosclerosis precursors, useful indexes for early detection of CVD, and predictors for increased cardiovascular mortality. To the best of our knowledge, this study is the first evidence of a possible reduction of cardiovascular risk through Tai Chi exercise by improving endothelial dysfunction and arterial stiffness in patients with RA.”

Why Tai Chi is so effective with RA

Research suggests that although arthritis is an issue affecting the joints, exercise should not be avoided. On the contrary, exercise is recommended for arthritis patients as a free and natural approach toward improved symptoms and quality of life. Tai Chi, being a continuous low-impact exercise, offers one of the best means for improving health, especially where painful joints and auto-immune inflammatory responses are present.

The practice is slow and steady and continuous. There are no quick starts and stops or sudden turns or fast twists as in other sports or aerobic workouts that can damage or inflame the joints or put too much stress on muscles, bones, tendons and joint. The practitioner stays within their normal range of motion, which over time increases, as the movements are mastered and relaxation in achieved via increased blood flow and meditative states.

Many arthritis sufferers do not exercise, which places them at risk for pain, obesity, diabetes, high blood pressure and heart disease. Tai Chi is a strong behavioral strategy for those who have RA as its practice can help reduce the inflammation associated with elevated risk of cardiovascular disease.

After reviewing a dozen or so other studies on the positive health effects of Tai Chi, this study’s authors conclude that, “Tai Chi exercise significantly contributed to improvement in endothelial function and arterial stiffness, independently of the traditional CVD risk factors, including lipid profile. Tai Chi exercise may be a useful treatment strategy for RA as a complementary and alternative medical approach to preventing CVD.”