Thanks to the international hit Ip Man movies, millions know of the handsome street-fighter Leung, whose brawling brought fame to wing-chun and, in the second movie’s finale, introduced Ip to a snotty young street-fighting buddy named Bruce Lee. Now, at the turn of the century, I spent a weekend with Duncan Leung at Virginia Beach. I was hired by Jow Ga grandmaster Hoy Lee to do an article for IKF, since I was an Inside Kung-Fu Hall of Fame writer. They brought me down and put me up in a motel.

Duncan is not handsome, has a dangerous moustache on a saturnine face with what looks like a knife wound on one cheek (botched dental surgery, actually), and it was the other way around — Bruce intro-ed Duncan to Ip. The story of why his buddy was even interested is great fun. Anyway, Bruce stayed close to Duncan until the end, and Duncan went on, past knife-and-fist fighting and top-tier law enforcement and military training, to become highly successful in many kinds of enterprises. He was a top-ten firearms importer, at one time, and also produced a string of successful Hong Kong movies. His personal stories, in this deep, flat, take-it-or-leave-it cigarette-smoker’s voice, were endlessly amusing and amazing. So, I published “The Dark Genius of Wing-Chun.” He must have liked it because, before he left to return home to Hong Kong, he sent me a keepsake – a framed and carefully matted Ching Dynasty coin, including a typed label on which he stamped his chop, so folks would know who gave it to me. Over the years, I’ve talked to very important instructors who studied with Duncan; none of them received any such memento. Duncan Leung is remarkable to read about. The Army once asked him how much he personally would charge to redo their hand-to-hand and self-defense programs. And, between you and me, ungentle reader, there’s a backstory, too, because, at first sight, he challenged me, pointing, bored, to his face, and froze when my foot held steady two inches from his nose. I started kicking at 17; I was smooth and very fast for a tall middle-aged guy. Caught him off-guard. 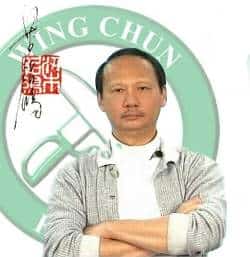 So, Duncan began to “clinic” me. In other words, rough me up a bit to get his own back. This happened late, late Friday night, by the way, around midnight, and he was just tired when I showed up. And, seriously, I didn’t think I’d “beaten his challenge” or anything. It was just another deal where you are the uki and throw a technique so the master can demonstrate something or other; even his freezing didn’t strike me because, as you know, lots of times the masters let the technique hang out there for a second while they decide which counter to use.

Anyway, that night I got a private lesson to die for. In fact, I came close to death and, as I’ll explain, it did me a world of good. But, for example, I questioned whether the one-inch punch could work in a real fight, and he made me hold the Yellow Pages against my chest, first, before knocking me across the office, crashing into a folding chair, and ending up on the floor. Much more was shown, but the last, most dangerous moment was the best. Over the years of cat rolls and what-have-you, I had developed a slightly protruding top neck vertebrae. Duncan wanted to finish up by showing me how to break a neck. By now I had the most absolute trust in this master’s control. Duncan seized my head and went much farther than anybody else had ever dared to go in cranking it around. I heard a crack!

And, the next day, I realized he’d given me a chiropractic adjustment and cured the condition! Read much more from Herb Borkland, including sharply insightful essays, and reviews of his latest novel, DOG$, at www.Herbork.com

If you like Wing Chun, check out these two great books and article!